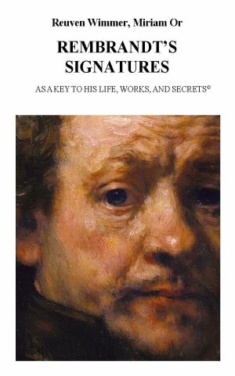 In the past research about Rembrandt, several elements of his work lacked explanation and were ascribed to the so-called “mystery of Rembrandt.” One of these elements is the casual evolution of his signature throughout his career. This book aims to demonstrate how Rembrandt’s signatures reflect the different spiritual stages of his life. By analyzing the evolution of his signature in his paintings and etchings, the essay will reveal Rembrandt’s connections to his different religious and fraternal affiliations: Christianity, Judaism, the Kabbalah, and Freemasonry.

In the past research about Rembrandt, several elements of his work lacked explanation and were ascribed to the so-called “mystery […]

Rembrandt Harmenzs van Rijn (1606-1669) was one of the greatest geniuses in the history of painting, and his influence in all facets of the arts extends to the present day. He was one of history’s most prolific producers of great paintings, etchings, and the most remarkable visual artist in the Dutch Golden Age.

Many aspects of Rembrandt’s life and work remain shrouded in mystery. The possibility of his having Jewish roots has been debated by historians ever since his death almost four centuries ago. Even experts on the life of Rembrandt have often underestimated his signatures as well as his affinity with Christianity, Judaism, and the fraternal order of the Freemasons. Freemasonry consists of fraternal organizations known as Freemasons (or Masons). The idea of Masonic brotherhood probably descends from a 16th-century legal definition of a brother as one who has taken an oath of mutual support.

An additional misunderstood element contributing to what has been referred to as the “Rembrandt mystery” is the occurrence of Kabbalistic Symbols and Hebrew lettering and signs in his paintings.

This essay aims to correct how both Jews and Christians misunderstood Rembrandt. It also sheds light on how his signatures can lead to a better understanding of the artist’s personality, life, and works. Our essay presents the story of Rembrandt’s life, reflected in the iconography and signatures in his works, since there aren’t many first-hand accounts of his life written by himself. In this essay, we deal with Rembrandt’s signatures as they appear on the recto of his paintings, drawings, and engravings, ignoring the verso of his works because inscriptions on the verso could be later additions by art merchants and collectors. To reveal their hidden meaning, we examined them in chronological order. We observe the nature of Rembrandt’s styles and show how he gradually develops his style, uncovering and discovering the hidden message beneath each signature. This essay offers a visual example of the different ways in which Rembrandt expressed himself through his signatures in the various eras and experiences in his life, from his youthful days in Leiden to the spiritual evolution he underwent in his later years.