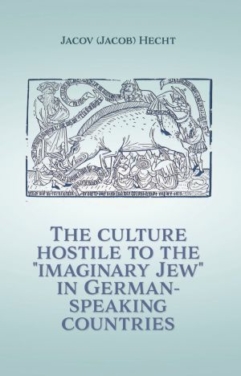 The culture hostile to the "imaginary Jew" in German-speaking countries

To purchase the book on Amazon: https://amzn.to/32PSmCN

The front cover image is a woodcut that appeared in Munich in 1470 depicting the "Jews' sow" (Judensau) with which they come into indecent contact with a female pig, an unclean animal forbidden to be eaten according to Jewish law. The banderoles that decorate the drawing are rhymes mocking the Jews (wikipedia). This file has been identified as being free of known restrictions under copyright law.

This monograph deals with the "imaginary Jew" in German-speaking countries who is perceived as being of reduced humanity, supported by the use of metaphors, narratives, and conspiracy theories that move between two codes, the theological and the conspiratorial. These codes, based on stereotypes known since the Middle Age, are still alive and potent and have returned with vigor during the Covid pandemic and are being spread virally by digital means.

Appearing on the cover of the book is a metaphor of a woodcut depicting a female pig which is intended to show one of the anti-Jewish motifs documented as early as the beginning of the 13th century. It is displayed in dozens of churches and buildings in Germany to this day, proving to what extent hostility toward the Jews has been entrenched in the culture, including in works of art.
images.jpg

Jacob Hecht, born in Berlin in 1935, holds a birth certificate with the swastika embossed on it, published a book on the history of the family from Bavaria (Hecht, 2005).

To purchase the book on Amazon: https://amzn.to/32PSmCN The front cover image is a woodcut that appeared in Munich in 1470 […]