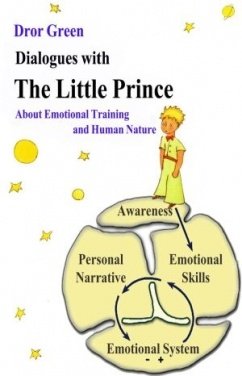 Dialogues with the Little Prince

הוסף לרשימת המשאלות
תגיות: דרור גרין, Dialogues with the Little Prince, Emotional Training, Human Nature.
שתפו
Thirty years after Antoin de Sanit-Exupéri met the little prince in the Sahara Desert, the little prince met Dror Green in the Sinai desert, during the war between Israel and Egypt. For hours they recalled the little prince’s journey and his encounters with special people, each representing a facet of the cruel and selfish nature of capitalism.
The encounter with the little prince enabled Dr. Dror Green, who developed the method of Emotional Training, to review the common conservative concept of human nature. They both rejected the belief that human nature is selfish, and suggested a new approach based on empathy, sharing and love.
Dr. Dror Green practice the method of Emotional Training in his everyday life. He lives with his wife and four children in a small village in Bulgaria, which is a kind of paradise, where they run seminars for groups and couples, with whom they share their lives and experience. He is a psychotherapist, musician, painter and the author of about 40 books for children, adults and professionals.

Thirty years after Antoin de Sanit-Exupéri met the little prince in the Sahara Desert, the little prince met Dror […]
1. The first meetingOnce, when I was five or six years old, I was standing in the garden after sunset, watching the first stars
appear in the sky.

I remember that while looking at the stars, a new notion emerged and created unfamiliar thoughts: what was there behind the stars?

Behind the stars there are more stars, I promptly replied to my own question, in order to remove the confusion and bring back some order to my thoughts. But this apparently obvious
answer did not satisfy me.

And what is there behind the other stars? I went on asking myself, trying to imagine the end of the universe dragging away from me, until I realized what was bothering me.

What is there in the end of all things? The irritating question came of itself. What is there behind the last
stars in the sky?

And thus I realized the uncertain concept of infinity, and the insight that I could not think or imagine anything that has no clear boundaries or no end. It was an irritating and even a threatening thought, and it was the first time I realized the difference between the obvious sense in which the world actually existed and the way I was able to think of it
and understand it.

A few months later, when I started to go to elementary school, the headmaster died, and it was the first time that I became aware of mortality and experienced death anxiety.

It was not fear that I had experienced, but a kind of extreme unpleasantness, facing again the cruel existence of ambiguity.
The same question emerged: what is there behind the end of life? Is there life after death? And if there is not, where will I be after death? What does life mean if it is destined to disappear?
It was frightening, because these questions, by definition, had no answers. I felt that I had no sense of a safe place in my life, and there was no one to support me and create a safe place for me. My father left home when I was three years old, and I was scared of my young mother, who was occupied with her own business and could not be bothered with a little boy.
I felt that I couldn’t expect grown-ups to provide me with a safe place, and started to develop my own sense of a safe place.
I found my safe place in books, and to this day I never leave my room without a book in my pocket. I painted and wrote poetry, and felt as if I could
control my own imagined worlds. But my mother and other grown-ups used to criticize my naïve manifestation of anxiety, so I kept creating them in my own imagination, and spent my time envisioning a better world, in which people love and support each other.
One of my childhood books was The Little Prince, by Antoine de Saint-Exupéry. It was a present for my fifth birthday from my grandmother’s sister, but I only read it when I was sixteen. Although the book was printed in hard cover with color illustrations, it was not a children’s book, and it was not a naïve allegory about the human paradox, as it is often commonly interpreted.
It is a book about human nature, about the old concept of selfishness and natural selection, and the new concept of empathy and sharing that was revealed more than half a century after the death of the author, and is not yet matured.
It is a book about life and death. This explains why it starts with a fearsome drawing of a Boa snake swallowing a beast:
Animals and human beings kill each other, and death anxiety is a natural response to this unfortunate fact. Death anxiety provokes our basic instinct of fight-or-flight that protected our ancestors from wild animals thousands of years ago. The basic instinct recruits all our physical resources and paralyzes part of our physiological system, so we can attack and run.
The basic instinct is effective for a limited time only, and we cannot face death anxiety continuously. This is why, when we grow up, we tend to ignore the signs of anxiety and interpret reality as a false safe place. We prefer not to identify a boa snake that swallows an elephant, as de Saint-Exupéry suggests in the first page of the Little Prince:
Instead, we prefer to believe that we are observing
a hat:

The Little Prince
is a book about life and death, about anxiety and about the search for a safe place. These new ideas became clear in my mind a few years later, when I faced my own death and met the little prince face-to-face.