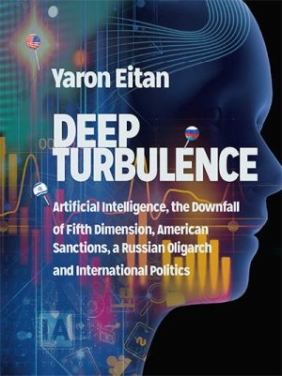 It is easy to be a successful entrepreneur when luck is with you, but what if you are facing the opposite? This book brings the amazing personal story of Yaron Eitan, one of the most experienced Israeli-American tech entrepreneurs whom I am honored to refer to as my friend and mentor. An ever-optimistic visionary with tenacity second to none, Yaron candidly describes in vivid detail how he turned difficulties into opportunities, and unexpected setbacks into successes. The book is an exhilarating page-turner, and a must-read for every aspiring entrepreneur.

Yaron Eitan’s book, Deep Turbulence, is a personal story about his experiences as a skilled, veteran hi-tech entrepreneur. It is a book that offers insight into the world of entrepreneurs and entrepreneurship. Entrepreneurs have one prominent trait: eternal optimism. This optimism allows for them to almost equally accept failure as they would success. This ability is a common thread throughout the book, turning the business roller coaster Yaron depicted into an exciting journey involving companies, funds, oligarchs and governments — a journey I read, despite our many years of acquaintance, with bated breath.

Deep Turbulence is the conclusion of a stormy and fascinating chapter in Yaron Eitan's business life. It began with enthusiasm and ended overnight with the involvement of a dramatic and worldwide economical-political affair, involving Donald Trump, Vladimir Putin, Viktor Vekselberg, porn star Stormy Daniels and a long list of characters from the world of investment and venture capital funds. In precise and fluent language, with extraordinary honesty, Yaron relates what goes on behind the scenes of the world of investment and funds, revealing for the first time the real reasons behind the failure of the company Fifth Dimension, under the management of Benny Gantz, and describes what made him fall in love with the technological world of AI, turning it into the center of his professional activity — until this day.

Yaron Eitan is a serial enterpeneur and venture investor with a long history of founding and building technology companies. Eitan is especially proud of three companies he co-founded in the last four years. All three companies are applying advance form of analytics called deep learning to different market applications. Yaron Eitan was born in Haifa, got his bachelor degree from Haifa University and MBA from the Wharton School of the University of Pennsylvania. Yaron is married to Hagar and has three children. He is sharing his time between Tel Aviv and New York.

It is easy to be a successful entrepreneur when luck is with you, but what if you are facing the […]

The SCP Fund and the Years Following Geotek