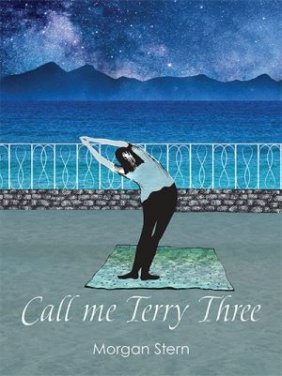 I spread my arms wide and felt as having the whole world just to myself, elevated high into the sky, with only the small sickle of a new moon and the stars keeping me company. At 1:45 am. I spread my mat on our balcony and began with the breathing exercises. Having no other lights than the stars, I progressed through the Yoga class by heart, without your book, Bikram, for the first time.

It all began with the gift of a book, which encouraged one woman to turn her bedroom into a Yoga studio. Unexpected things happen, while trying to juggle her job, caring for her family and practicing Yoga according to the instructions of a silent book-teacher. The path to her set goal is far from being smooth, but plastered with heartwarming insights and humor.

The author was born in Germany, where she trained as registered nurse. Together with her husband she came to Israel in 1986 and officially immigrated in 1991. Today she lives with her family in a settlement near Jerusalem and works in one of Jerusalem's hospitals.

I spread my arms wide and felt as having the whole world just to myself, elevated high into the sky, […]

It was quite an outrageous idea, but really – why not? Who could see me in the cover of night with everyone sleeping? To the back of me was our quiet and dark apartment, to my right the high wall separating us from our neighbor’s balcony. To my left just visible in about 10-meter distance, the balcony of the uppermost apartment of a neighboring building, also on the fourth floor. The family there often runs their air-condition at night, which I can easily tell by the tinkling and purring noise the engine outside their building wall, just opposite our bedroom, makes. And with the tinkling engine also all shutters were shut tightly. Some people need it to be pitch black to be able to sleep. So, that confirmed that nobody from this side was up and about. High above arched the starry night sky, reaching far to meet the Golan Heights beyond our Kineret, that stretched beautiful as ever down below in front of me. Only the recently burnt up slope was between us. Some red lights dotted here and there on the lake’s dark surface, marking fishing boats out on duty. Dawn brings them back with their catch, to be sold by morning in the market.

Lights of some cars were moving on the highway that runs alongside the lake. Since the Intifada broke out again, last October, just when we celebrated the Jewish New Year, there are generally fewer cars on the roads.

I spread my arms wide and felt as having the whole world just for myself, elevated high into the sky, with only the small sickle of the new moon and the stars keeping me company. Down below in the fields, I heard the crickets chirp. It was a fantastic scene! The Big Dipper stood left above me on its head. The Swan floated gracefully to my right, and in between them, the Northern Star. It points clearly to the uppermost lights on the mountain range that mark Zfat, the old town in Israel’s north.

At 1:45 a.m., I spread my mat on our balcony, and began with the breathing exercises. Having no other lights than the stars, I progressed through the yoga class by heart, without your book Bikram, for the first time. Around the Half Tortoise, I think I mixed some poses, but I did them all, full program.

In No. 5, DANDAYAMANA-JANUSHIRASANA, Standing Head to Knee Pose, and in No. 6, DANDAYAMANA-DHANURASANA, Standing Bow Pulling Pose, I had unexpected difficulties keeping my balance, which I found quite surprising, since I didn’t have them in my bedroom studio. Perhaps, wall and bedpost so handy nearby, gave me the confidence that I lacked out in the open. The experience of stretching freely and limitless to all sides was something unexpectedly joyful. I mostly feel sore, generally, when I begin the class. Perhaps this is, because I constantly try, to reach Bikram’s “MAX-I-MUM”, and perhaps it means that I am progressing. I heartily hope so. The pain I felt today, was especially in the lower back and hip joints and it prevails.

I always love the Dead Man, these twenty counts of rest. Though, lying on my back, resting because my yoga teacher Bikram said so, and gazing into this majestic night sky was exceptional beautiful.

At 6:30 a.m. I woke up again, and the day started with household and weekday chores, children going to school, husband to work and nobody guessed that I had done a quiet nightly yoga class.

Today I am not working at the hospital. I hope to be able to progress a little in preparing this lecture about blunt liver trauma, that is due next month.

A gun in a battle of knives