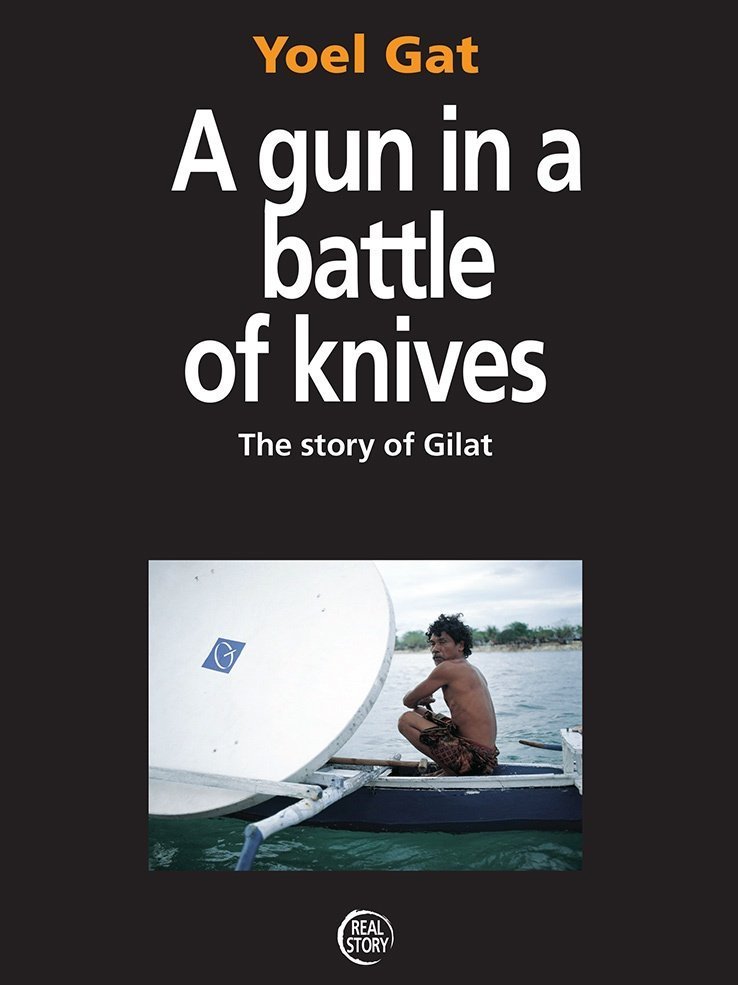 A gun in a battle of knives


"What is it that attracts so many people to high-tech like moths to light? To comprehend the industry’s allure, you must  first acquaint yourselves with those exceptional people who are known as ‘entrepreneurs' What is the motivation behind the marshalling of all the forces and the intensive focus of the entrepreneur on his new enterprise? It is not the financial incentive, for money is merely a by-product of success, not the goal. In fact, as far as the entrepreneur is concerned, money is the least important factor at the start of a new undertaking. More than anything else, the entrepreneur wants to make an impact on the world Perched on the wings of his imagination, desire, and dreams he searches for the ‘next big thing’ ".

Gun in a battle of knives is the breath taking story of Gilat Satellite Networks, an Israeli company that took on the world with determination and thrust, capability and motivation and thrived to a prominent position in the world in its industry.

Real life business thriller and a Biography of a start-up that became a success story that stunned the world, told by one of it's founders and CEO, and the visionary of the group that lead it in the trenches all the way to the top, and was there in the tough hours of the fall.

Yoel Gat, 55, received Israeli defense award twice and was the co-founder of Gilat with a team that left with him their unit in the army. Gat was CEO in Gilat since inception in 1987 until he left the company in 2003.

Although I have set out to tell the tale of but one Israeli company, Gilat Satellite Networks, the book can also be viewed as the story of the Israeli high-tech industry in its entirety – an industry built by dreamers and visionaries. Many of these individuals realized their dreams of having an Israeli company reach lofty heights by dint of introducing Israeli chutzpah (audacity) to the big world, which enabled them to compete against giants and succeed.

What is it that attracts so many people to high-tech like moths to light? To comprehend the industry’s allure, you must first acquaint yourselves with those exceptional people who are known as ‘entrepreneurs.’ In most cases, entrepreneurs are individuals between the ages of 35 and 40 who understand that half of their lives- or at least half of their careers – are already behind them, and they are looking for a change.

The next question is what motivates the entrepreneur to marshall all of the forces and the intensive focus needed to drive his new enterprise? It is not the financial incentive, for money is merely a by-product of success, not the goal. In fact, as far as the entrepreneur is concerned, money is the least important factor at the start of a new undertaking. More than anything else, the entrepreneur wants to make an impact on the world. Perched on the wings of his imagination, desire, and dreams, he searches for the ‘next big thing.’

A company – and in our case, an Israeli company – is the means for realizing those ambitions. At first, all you hope for is to develop your own product. Once the product is ready, you make an effort to try and sell it. Thereafter, you do everything in your power to establish a reputation on the world market, and then you strive to become the world leader in your field. All this, however, is not enough. You want the company’s ascent to continue: You want to reach the stars.

If any entrepreneur knew beforehand the effort that starting up a company entails, he or she probably would not have chosen this path. However, the entrepreneur believes against all odds. The entrepreneur wants to establish, influence, take off, and achieve. This passion for success is stronger than any other part of his or her personality. It is the raison d’etre and fate of the entrepreneur.

Like any enchanting fairy tale the story of Gilat consists of a united team with a strong culture, blind faith in the righteousness of its way, and uncompromising willpower. It is the story of a company that came out of nowhere to become a corner stone of its industry and, following a series of decisive and judicious moves. assumed the role of global leader. However, once Gilat began to dream of reaching places that only the huge companies dare to roam – the American home consumer market – it fell flat on its face.

Gilat had clear competitive advantages. Its technology completely outclassed the competition; they fought with knives while Gilat had a gun in each hand: A unique technology that was reliable and inexpensive; satisfied (and at times ravingly happy) costumers; an aggressive culture; and, exceptional people skills – nearly everything. The company was driven by a vision and a loyal founding team – an extensive group of veterans from the ‘Unit’ (in the Israeli army) – that spearheaded the discovery of a large market and quality opportunities.

However, sources of strength always bear the seeds of their own destruction. The glare of success momentarily blinds the entrepreneur and he fails to notice the warning signs .The world conditions that led to success does not stand still; changes in the big picture glide by unseen and, it seems that in an instant, the marketplace is already clamoring for something else. Undaunted, the entrepreneur and his team continue to forge ahead with the old dream until momentum suddenly stops. But by then it’s too late, as the organization has blindly followed the entrepreneur into the abyss, still convinced of the rightness of its way and still imbued with that fervent faith.

Lastly, this is the story of five entrepreneurs who set out together on a long trek: Shlomo Tirosh, the former commander of “the Unit” – a straightforward, aggressive, dedicated, and energetic man with a merciless tongue; and Gidi Kaplan, a talented engineer who fathered many of the main technological ideas that Gilat developed and ran its development and technology group for many years.

It is also the story of a pair of brothers who are about as different as can be: Joshua and Amiram Levinberg-the sons of Zalman Levinberg, the long-time manager of Maariv (one of Israel’s largest daily newspapers). Joshua, the older brother and a mythological figure, was the only one of us with previous experience in the high-tech world. He was responsible for the marketing and business development and also handled all administrative matters. Short and skinny with piercing eyes that scrutinize five dimensions simultaneously, Joshua is a sharp strategic and complex tactical thinker who had a profound influence over all the primary directions the company considered. Amiram, the younger yet more solid of the two brothers, was my comrade-in-arms. Before the establishment of Gilat, we worked side by side, at adjoining doors, for ten years. Dubbed “Mr. Common Sense” by the founding team, Amiram is an alert individual with a knack for piecing together a puzzle and comprehending the big picture in a visible and coherent manner. He is curious with strong technical skills and a rare understanding of the mysterious ways of the market. Moreover, he is more than willing to burn the midnight oil in order to learn a new subject. It is hardly surprising, then, that Amiram was responsible for all of Gilat’s successful products.

This is also my story. The defining event of my life occurred at the age of sixteen. As a group leader in the Scouts (in Israel the Boy/Girl Scouts are co-ed), I made up my mind that my team was going to win the city Leadership Cup and dedicated a half a year of my life to that goal; I dreamt about the competition every night and planned for it every day. I motivated my groups and they too were swept up by the vision. The preparations were long, difficult and exhausting, but the actual triumph was a walk in the park because all the steps were mastered ahead of time during the drills: a gun in a battle of knives. This lesson has remained etched in my mind to this very day.

At Gilat, I served as a player-coach, although too much of the time was spent as a player. I lacked any business background, save for my business management studies before Gilat was founded, but I was born for marketing and sales. I have the ability to rally people – employees, customers and investors – around me and convince them that my ideas are worth pursuing, occasionally beyond what is desired…

The five of us enjoyed working as a tight, entrepreneurial team. We would focus on a specific objective and, immediately after achieving it, we would turn to a new and bigger goal. The magic word was momentum-a fast-paced, step-by-step building process, which involved an immense and occasionally heroic effort on our part. We firmly believed that we would ultimately reap the fruit of our labor.

Furthermore, we considered our enterprise a modern form of Zionism; namely, a promising model for the Israeli economy, which would provide us with a deep sense of satisfaction.

The competition over world markets was waged on a daily basis and was often ruthless. We set out for battle against giants and bested them. We competed against anyone, anywhere, under any conditions and did not concede so much even on a single battle – even after the top analysts in the world proclaimed that we had realized our dream of global leadership in our field. And let me remind you that we started out as a small Israeli company, whose name no one could even spell.