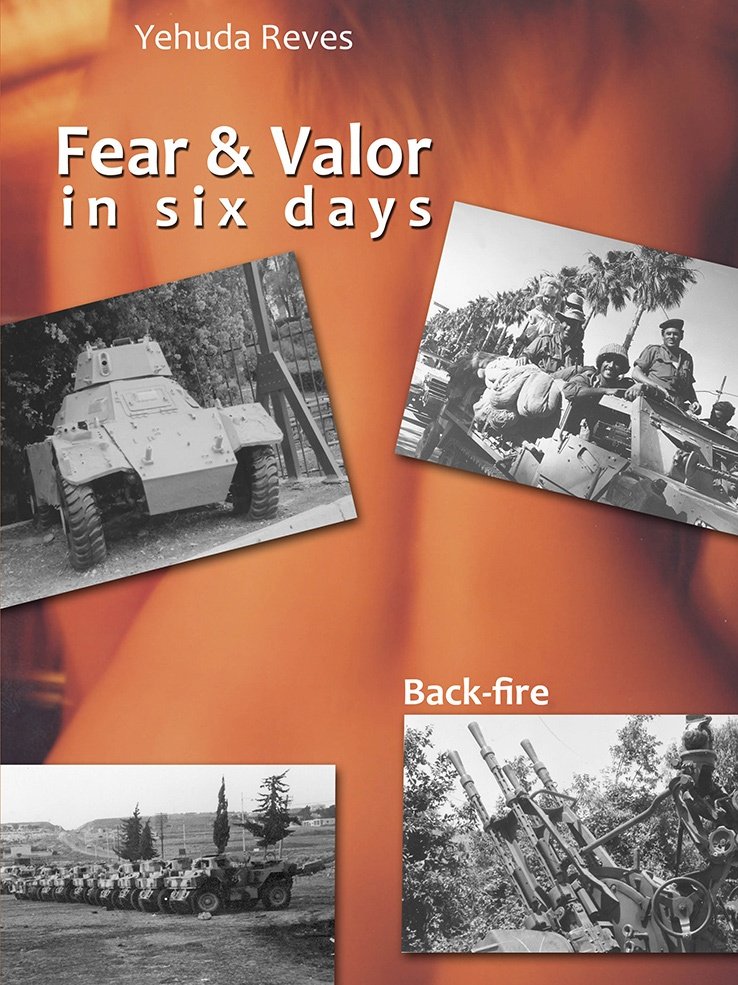 Fear and Valor in six days

Fighter log recorded during the battles of the Six Day War and after over 40 years. A critical consideration through the sights of a bazooka on fear, courage, pride, death and love, the bitter and cruel reality and Israeli men Company written on the front fighting the army of northern Samaria and Northern Heights

Fighter log recorded during the battles of the Six Day War and after over 40 years. A critical consideration through […]

The Reserve Army before the Six Day War – In the nineteen sixties, reserve combat soldiers were given the task of responding to Soviet doctrine: The Soviet Union provided Egypt and Syria with weapons and ammunition, as well as the principles of Soviet combat. The IDF prepared a response and we were drilled in finding a method of breaking through the “Soviet defense line”. Reserve forces were recruited and infantry units were re-trained as armored infantry. The training drills were carried out with armor and infantry conveyed on half-track armored cars. We trained in the method of a frontal breakthrough of the “Soviet” defense trenches. The military solution of the army officers in charge of our logistics was to travel along the sand dunes perpendicular to the enemy defense trenches at the maximum speed possible for the antiquated armored half-track. The trenches represented the defense line of Soviet doctrine. Our old half-tracks were remnants from the Second World War when they were used for the famous invasion of Normandy in France – General Eisenhower’s invasion. The half-track would almost fly into the air and land in the trench or on the edges of the trenches. This is how we dealt with the Soviet obstacle, thrown frequently into the air to land on the edge of the trench, where we would knock against one of the metal corners inside the armored car. To this day, I still carry the marks of one of these blows on my body. I fell against the metal corner of a tool box that hit a rib on the right side of my body. From the force of the blow and the pain I turned so pale that the squadron commander, a Lieutenant Colonel, who was in the armored vehicle at the time, got such a fright that he shouted: “What happened, Yehuda?” This story is a reminder and an illustration of the commander’s involvement, presence and attention to every detail of the training. This behavior proved itself during the war and the battles we were to fight in the future.

In the area of the Northern Negev, between Kibbutz Mashabe Sadeh and Bir Asludge, we reservists were put into armored cars. We were given tanks and, under command, we learned to cross trenches, defense posts, and improvised enemy lines and to operate with armed forces combined with support from the air.

One of the last training exercises was carried out in the grey arid hills of the Negev near Bir Asludge, not far from Kibbutz Mashabe Sadeh and the Yeruham junction. We carried out a dawn attack on an “enemy post” – a large exercise that concluded a lengthy and exhausting training. Chief of Staff, Itzhak Rabin, together with staff from headquarters came to observe the concluding exercise, appraise and correct our operational ability.

It was a cold desert night. We traveled with convoy lights (dimmed) across the “Hemada” desert hills with their round, persistent and scratched desert stones, scorched and burned bright brown by the dusty winds. Scattered among ravines, wadis, and the “Hamada” desert stones, were dry succulent Zygophyllaceae bushes. The dry loess soil of the Negev was worn and ground beneath the chains of the armored vehicles raising a fine, suffocating dust, a mist that colored the sky and the fighters’ faces. The sun-scorched “Hemada” stones hampered the movement of the vehicles and, at night, dust limited vision to a distance of a few meters ahead.

I was given the task of leading the attack on the enemy hill. Altogether, I had a division of nine tanks and armored vehicles under my command. Behind me, moving slowly through the night, were two more divisions, 27 armored vehicles all counted. I kept asking the company commander in the jeep in front of me: “Show me the location of the hill we are attacking on a map or aerial photograph”. The behavior of the company commander, Gadi Meitar, was unusually friendly as opposed to his counterpart, Asaf Yaguri, who treated his fellow soldiers with arrogant self confidence.

My company commander responded: “I don’t have the data yet. I haven’t been given the exact location of the hill on which our ‘cruel enemy’ is situated. I don’t know either”. Very slowly, we traveled behind the reconnaissance jeeps until the break of dawn. I was stressed and tried every way possible to obtain the data and location of the ‘enemy hill’ because, very shortly, I would have to instruct the tank drivers to take up frontal battle positions, storm the enemy target, and shoot live ammunition. The company commander constantly asked me where to attack, where to aim. Finally, dawn broke and the exercise began, still without data regarding the attack. I watched French “Mystère” jet planes swooping over one of the hills opposite and dropping napalm bombs (still used at the time). I decided that this had to be the hill and directed the vehicles in that direction. All of a sudden, without giving a location, the order to attack was heard over the radio-transmitter. I swiftly passed on the order to the tank division; we opened fire and, all vehicles firing, we moved forward. We ‘conquered’ the hill, ‘drove off’ the enemy and reported to the Command. I ordered “cease fire”! And all fronts fell silent. A routine report on the wounded and killed and the state of ammunition was made – as always in an exercise.

I wasn’t sure whether to feel relief or anxiety – in case I hadn’t attacked the right hill. I suddenly noticed that the division sergeant was firing magnesium flares from a small mortal on his armored vehicle, I yelled at him: “Why are you firing flares in the middle of the day – the exercise is over!” The sergeant quickly apologized, saying: “but I had some extra ammunition”… To which I responded: “The Chief of Staff is watching from a nearby hill overlooking the area. Just so you know, if I go to jail, you’ll be sitting right there beside me”…

A quiet fell over the battle field, a kind of anti-climax, and the soldiers began to clean their weapons and prepare to return equipment at the end of their reserve duty. The conclusion of the exercise by officers and the Chief of Staff had only just begun up there on the hill, looking down on us below.

At the lookout area on the hill, two large tents were erected and many officers gathered to hear the conclusion and be close to the top command. Suddenly a voice was heard over the division radio transmitter: “Would the officer in charge of the attacking force on the hill please see the Chief of Staff”. I felt as if dooms day had come, that I had probably missed the hill and/or fired magnesium flares after the end of the battle.

I started my vehicle and drove up to the top of the look-out hill and the IDF Chief of Staff. Crowded round the tables were officers of all ranks. It was so crowded that it was impossible to see the table of maps or the face of the Chief of Staff, Itzhak Rabin. So I stood behind the broad backs of the senior officers, listening to half sentences that disappeared into the desert wind with its fine loess dust that made the eyes smart and the mouth dry.

Finally, a gruff authoritative voice was heard: “Would the officer in charge of the first attacking force come to the center of the tent”. A path opened between the walls of officers up to the center of the tables set in the form of a U and, hesitatingly and transparently unconfident, I was pushed forward not knowing whether I was running or walking. “Are you the officer in charge of the first attacking force?” asked the Chief of Staff. “Yes, I am”. “I wanted to tell you”, continued the Chief of Staff in his gruff voice, “that your attack was excellent: precisely on time, the deployment of the force was unified and very good, likewise the firing pace and battle order. That is how the job should be done.” I was completely confused and surprised by the praise and answered: “Yes sir”.

I returned to the division and prepared to return the equipment and be released from reserve duty.