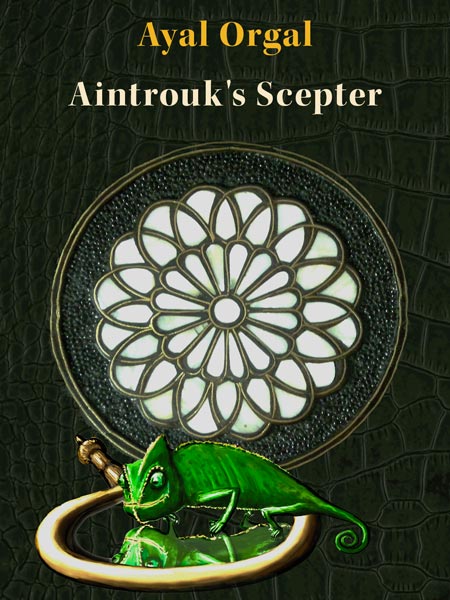 Kings and princes from throughout the land arrived at the Queen of Erl’s palace, bowing low before her radiant beauty. The Queen, controlling her subjects and nobles with an iron fist, rejects them all. Her heart is captivated by her Royal Crier.

A mysterious suitor’s arrival at the palace exposes a loophole in the kingdom’s Books of Laws. The suitor succeeds in breaking the bonds in the Queen’s heart, causing a rift between her and the Crier. And as all this is happening, news of war between two past great empires reaches her ears, pitching the kingdom’s wellbeing against her own personal benefit, and requiring the Queen to quickly choose sides.

Aintrouk's Scepter is a story of power struggles and bloodshed on the dual fronts of kingdom and palace; of long journeys on foot and into the soul; of aggressive sexuality, and pure love; of hope, disappointment and devotion to ancient traditions; and of one scepter, a scepter of a Royal Crier named Aintrouk.

Ayal Orgal was born in 1982. Aintrouk’s Scepter is his second book.

Kings and princes from throughout the land arrived at the Queen of Erl’s palace, bowing low before her radiant beauty. […]

The higher he climbed, the colder the air became. One foot found sure anchor. The other also sought a protruding stone or a narrow rock shelf. He breathed effortlessly, with comfortable regularity. On his shoulder hung a bulbous leather pouch, tied shut with thin string. On reaching the mountain peak, he would see the great lake, which, at the moment, still lay hidden by the spiny forest. But, for now, his eyes focused on the layers of rock and the colors that marked eras and epochs. His thoughts contained no concerns, and were calm. His hands, supporting his body, felt the past through their fingertips – fingertips that could hear the call of the mountain. Far below, life carried on with the enthusiasm of the ancient world.

On the mountain peak stood a rock shaped much like a throne. A large kasseros tree spread its branches, its trunk veined and gnarled like ancient hands offering shade to any creature resting below. From between its roots, a clear spring bubbled. From it, water gathered in the small depressions on the seat of stone, and slowly seeped deep into the mountain. Fingers of low grasses burst through the muted shades of rocks scattered across the mountain peak, glistening in pale green. Near the tree, but not beneath its branches, a circle of stones marked the site of an old bonfire.

He came from the land of Nokria and was glad to have returned.

Leaning on a massive root, he rested his arm against the tree’s broad trunk and greeted the tree. His gaze scanned the treetops, noticing that there were no new branches, but the old ones had not shriveled. That was good. He moved to the water and drank, then adjusted the circle of stones a little and sat with his back supported by the tree, slipping the sack from his shoulder as he settled on the ground. He whistled a practiced tune. From his shirt pocket, a long, northern-lands chameleon climbed out, scampered to his knees and sat there, observing its surroundings. It scuttled forward, having caught the whiff of water, drank its fill, then returned to perch on one of his knees.

From his sack, he pulled out the twigs and dry branches he had brought from the plains, and set them alongside him. He drew out two black, serrated stones from a small, cloth bag. Fairly soon, it would be the right moment to commence.

As that moment came, he lit the bonfire. Thick, aromatic smoke swirled upward from the stone circle, climbing ever higher and ever further, toward the south. At ease, he watched over the small, leaping tongues of flame.

No rain would fall today. It was a day when the sun stood in its rightful place, and the clouds were white and airy – a good day for climbing a mountain.

He looked up from the fire, his gaze moving away with the smoke, far away, southward… far, far away, to where his eyes could no longer see.