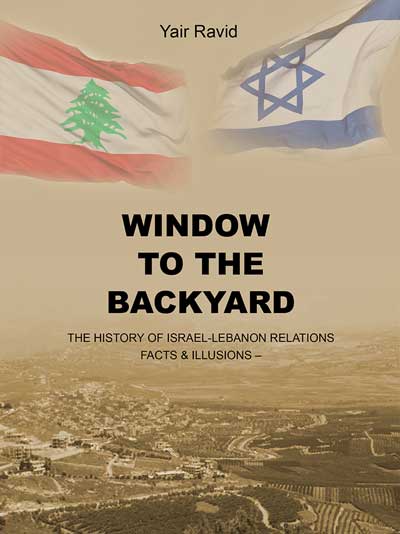 WINDOW TO THE BACKYARD

An obligatory read for those who wish to understand why and how the state of Israel got entangled in Lebanon. This book was written by a member of the Israeli Intelligence Service and former Mossad agent, Yair Ravid (Ravitch), who was in charge of establishing Israel’s connections with South Lebanon and the Christian Phalanges in Beirut in 1976. It describes and analyzes the thought patterns that governed those who initiated contacts and the relationship with South Lebanon, as well as the reasons leading them to deviate from the original intentions, thus sinking Israel in the Lebanese swamp. The author describes things as they were, without embellishing or beautifying reality. The second part of the book comprises a variety of stories about the experiences of an Israeli Intelligence officer, told with wit and humor.

(Yossi Melman, journalist and commentator on security and intelligence affairs)

Yair Ravid, known in the intelligence community and in Lebanon as “Abu Daoud,” sets out before us in his personal and authentic story, a turbulent and fascinating period in Israel’s relations with the Christians in Lebanon. A relationship that began in the 1970s with the Christian villages in South Lebanon designed to counterbalance the presence of the Palestinian military forces, continuing with an alliance with the Christians in the north formed before and during the First Lebanon War, ending with the hasty withdrawal of the IDF from Lebanon under pressure of Hezbollah attacks.

The book reveals once again – this time from someone of esteemed authority who is well versed in the Lebanese language and mentality – Israel’s political and military folly, led by Defense Minister Sharon, in an attempt to impose a new order in Lebanon, without understanding and internalizing the fragile ethnic tapestry in the country, and the fact that the Christians were a broken reed.

Between the lines we can hear severe criticism of the conduct of the IDF Intelligence and the Mossad, never discussed or studied in depth to this date. Conduct leading to the sinking in the Lebanese quagmire, some of which was not in keeping with the code of ethics and professional standards.

Yair, who was my commander in the Mossad, is an excellent Arabist with a thorough understanding of Lebanese culture and history. He also has strong analytical abilities and a keen sense of criticism. Through his personal story he offers us a rare glimpse behind the scenes of the intelligence campaign which took place in Lebanon.

Yair Ravid (Ravitch) was wounded during his military service. Despite his disability he completed his officers’ course with distinction and continued his service in the standing army in the IDF Intelligence Corps.

He served in numerous positions in the field of recruitment and operation of agents in Arab countries. In 1976, in his capacity as commander of the Northern Region of Unit 504, he was responsible for establishing the contacts with the people of South Lebanon; contacts which later lead to the establishment of the South Lebanon Army. He was also responsible for forming the relationship with the Phalanges in Beirut, which was later transferred to the responsibility of the Mossad.

He himself transferred to the Mossad and filled several command positions in the organization’s stations in Europe. In 1982 he was appointed commander of the Mossad’s operational station in Beirut, a position he held for three years.

I decided to write this book so I could convey to the readers my perspective on the establishment of the relations between the state of Israel and the Christians in South Lebanon and with the Phalange Party in Beirut in 1976. As the one who headed and shaped the mechanism through which we created the contacts with the Lebanese, I can point to the dilemmas we faced and shed light on the gaps between our original intentions when initiating the contacts and the reality that unfolded on the ground, leading Israel to sink in what came to be known as “the Lebanese swamp.” There is no dispute that the Israeli Defense Forces’ (IDF) decision to enter Lebanon and remain there for quarter of a century was one of the central and important events in Israel’s history. I believe it is fitting that those interested in what is happening in the Middle East learn how this policy was born, how it developed, and most importantly, what were the reasons that led to the entanglement and to the “sinking into the swamp.”

At the time we were busy doing what had to be done, and did not attend to documenting the events.

In addition, when writing this book, I did not have any access to documents that do exist in the archives of the IDF’s Unit 504 and Intelligence Branch.

The events described in the book are based on my memory and the way I saw things.

For information regarding dates of events, I consulted a military heritage document of Unit 504 in which I served. The document was written by several people: Colonel Yigal Simon who was my then-commander, Colonel Jacob Zohar who was my deputy, Lieutenant Colonel Yigal A. who served as the head of an intelligence collection base under my command, and me.

In the chapter that deals with establishing contacts with the Phalanges, I include quotes from Joseph Abu Khalil’s book: The Story of the Maronites in the War (Qsset al-Mawarne fi al harb), published in Beirut. At that time he was editor of the Al Amal newspaper belonging to the Phalange Party. Joseph Abu Khalil was one of the senior leaders of the Phalange Party and the individual with whom I held contacts while establishing the connections with the Lebanese Phalanges.

Deserving of special mention are my mentors in the field of human intelligence: Uri Ofel who was my first commander in Unit 504, Samuel Goren who was commander of Unit 504 and later deputy head of the Mossad (Institute for Intelligence and Special Operations), and Lieutenant Colonel Mousa Atar, of blessed memory, who trained me at the beginning of my professional career. These individuals all taught me the art of operating intelligence agents.

I wish to thank my friend Dr. Mordechai Nisan from the Department of Islamic and Middle Eastern Studies at the Hebrew University of Jerusalem, who read the chapter about the history of Lebanon and offered scholarly comments. I also thank him for reading the first translation of the book into English and providing changes in the text.

My gratitude is also extended to my friend Uri Ofel who translated chapters of Joseph Abu Khalil’s book for me. Unfortunately, Uri passed away before my book was published.

Many thanks to my friend, Advocate Joseph Jeshurun who helped me with legal advice and offered his keen intellect to overcome the difficulties I encountered in my efforts to publish this book.

I also owe gratitude to my friend Moty Lubetzky, who financed the translation into English of several chapters from the book and urged me to publish the book in English.

My gratitude and appreciation are extended to the editor of the English edition, Tammy Yakobovich, whose curiosity and attention to detail greatly contributed to the quality of the book.

My respect and appreciation to Unit 504 officers, female and male soldiers, who served with me in the northern unit; without their devotion and professionalism we would not have been able to achieve the accomplishments we did. In this context, I would like to specifically mention my deputy, Colonel Jacob Zohar, Lieutenant-Colonels Yigal A., Avi Forshner, and Amos Menahem, and Majors Avi Gletzer, Yosi Benkel, Itamar Anabi, and Joseph A.

It is possible that some will disagree with one point or another that appear in the book; for there are as many points of view as there are people.

This book is divided into two parts. In the first part I describe the sequence of the events and processes that led to the establishment of contacts with the Christians in South Lebanon, which in turn led to the formation of the South Lebanon Army (SLA). Also described in this first part is the course of events which led to the establishment of the relationship with the Phalange party in Beirut. A relationship from which ensued a “covenant” between Israel and the military commander of the Phalange Party, Sheikh Bashir Gemayel, leading to and resulting in the Peace for the Galilee War (now known as the First Lebanon War) in 1982, the IDF invasion of Lebanon, and its remaining there for 25 years.

On the margins of this chapter, I describe my voluntary activities, assisting the SLA refugees who came to Israel in May 2000, after the IDF’s withdrawal from South Lebanon.

The second part of the book contains 11 short stories about colorful and unique characters I met over the long years of my service as an intelligence officer. These colorful stories offer the average person the opportunity to get to know characters otherwise foreign to them. All names in these chapters are fictitious and the identity of the people is blurred. Any attempt to link the characters described in the book to people in reality is at the responsibility of the reader.

Separately from this book, though an integral part of it, I will be publishing another book, dedicated to an especially favorite topic – of good food in general, and Lebanese food in particular. I decided to share with readers my experience with the Lebanese kitchen and table.

I hope readers will be interested in the first part of the book, will generate pleasure from the second part, and will delight in the recipes and flavors of my Lebanese cookbook.

I dedicate these books to my parents Tova and Yehuda Ravitch, of blessed memory, to my children Oren and Rotem, and to my beloved wife Rivka who carried alone the burden of the home and raising the children. Without her I would not have been able to live such a fascinating, and hopefully contributing, life.