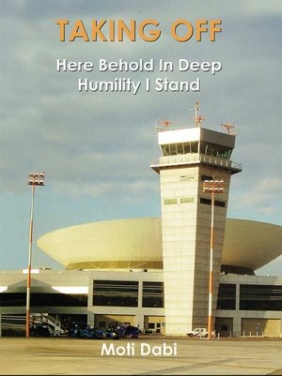 “Unbelievable. Despite the fact that this was exactly what I had asked for, I was stunned. Me, Moti Dabi – Here behold, in deep humility I stand – will be having lunch with the prime minister.”

The fact that he was born to parents who had immigrated to Eretz Israel from Iraq in the 1920s, triggered him to understand the meaning of vision and the way one should see the future. The fact that he was the ninth child in a family of ten children, taught him how to stand his ground and be resolute about his own decisions. The pleasant nature and devotion of his mother, who lovingly managed their home with care, made him into a man who knows how to bring people together. His father’s strictness alongside his understanding and tolerance which he exhibited toward his children’s mischievousness, showed him the subtle balance between demands and endearment.

And when Moti Dabi combined all that he had learned and absorbed in his childhood with his natural gifts, the opportunities he met and the understanding granted him by his wife and children – there were no boundaries to what he could achieve. And he doubtlessly achieved.

His book, Taking Off, is not only the story of a life. It is an inspiring story for young people, a guidebook for managers and a thought-provoking book for anyone who wants to learn about decision-making processes in the kind of complex situations that the author has experienced.

I read it, I liked it, and I was even moved. An impressive life story, sensitive and fascinating – Zionistic, Israeli, and ethical. Moti Dabi’s personal story is intertwined with the story of Israel, the ingathering of the exiles, austerity, war and peace, building, economy, and infrastructures combined with boundless success. The is a story replete with modesty and humility that cannot conceal Moti’s endeavor as manager, leader and a man of vision, a man who could see the future with two feet on the ground and two hands holding the steering wheel. A moving book about a man who was not born with a silver spoon in his mouth, but with will power and a unique ability to navigate toward any goal that he set for himself. He took off and reached the sky, and today can look back with satisfaction at the path he had taken and his achievements. He has my full admiration!

The life story of Moti Dabi is a role model. The book is an interesting biography, written clearly and fluently, and is even moving. It carries an overt message which includes tips to every manager. The roles he fulfilled over a fifty-year period required him to cope with a variety of managerial challenges. Moti shares his experiences with his readers, and mainly the lessons he learned and the wise advice he can offer. In addition, the book has a covert message which is Moti’s character as it is reflected in his life story, the way he coped with difficulties and mainly his ability to create extraordinary relationships with both his managers and his subordinates.

A man with positive energy and optimism that sweeps all those who come in contact with him.

A power that in my view will capture anyone who reads the book.

“Unbelievable. Despite the fact that this was exactly what I had asked for, I was stunned. Me, Moti Dabi – […]

The decision to write this book came after several years of deliberation. There were four reasons for my decision: I wanted both my close and distant family to learn about our origins and share with them the story of our family so they would understand where we came from, and appreciate the large tree that grew from those roots that began in Baghdad, in faraway Iraq.

I had a desire to relate my personal story to other people, from beginning to end. I believe that my life can serve as inspiration and instill motivation in others, mainly the younger generation. During the writing process I better understood how my family history shaped me into the manager I became, as well as my perceptions about managerial excellence and leadership.

Following twenty years of work in Israel Airports Authority, I wanted to offer my readers a taste of what goes on backstage. When you come to Ben Gurion Airport everything appears to be so simple and straightforward; it is hard to imagine how complex, dynamic, and challenging the place is, making managerial expertise imperative. It is also important to fully understand Ben Gurion Airport 2000– the difficulties, obstacles, preparations and plans that it involved.

I also felt a desire to present the topic of management by depicting the road I took, and the transitions required when managing various organizations. I began my managerial career in the Egged Cooperative, moved on to Israel Airports Authority and the management of the Ben Gurion Airport, and from there continued to become the CEO of

the Authority, and later Gaon Holdings. These transitions are part of my life story, demonstrating that no matter what system you are in, there are basic managerial principles that are always true. Through them one can acquire in-depth knowledge of the field, lead people and successfully manage systems.

The writing process was far from easy. I needed fortitude to look back, remember, and choose what to write. As the reader will see, some of the issues are personal and revealing, others involve human anecdotes alongside the story of my career. Friends of mine who read the manuscript said that the stories about my parents’ home and about raising my family were particularly moving.

This is true for me as well.

Doubtlessly, my experiences as the ninth child in a family of ten children shaped my personality. My older siblings tried to control the younger ones and order them around, and I, one of the younger ones, felt that I had to fight for and retain my place and status. Therefore, I rebelled and was obstinate. My father regarded me as a mischievous child. He used to say that nothing would become of me.

Over the years, despite everything, that child grew up.

Fortunately, I met inspiring people, who bore a decisive influence over my life, helping me pave my own path. The first was Bezalel Batsari, the principal of the Beit Aharon elementary school. He convinced my father to allow me to go to the Amal High School in Jerusalem, a decision that unquestionably changed the course of my life. In the Egged Cooperative, senior executives – among them Shlomo Levin and Yoske Harari – sent me to study, thus opening gates to the world of management. Both were much appreciated and gifted managers, natural leaders whose support warmed my heart and steered me ahead. I met Dr. Ramon Harel, my mentor, at the Israel Airports Authority. He asked me to work with him and take part in establishing the Israel Airports Authority. From him I learned the secrets of managerial and financial theories. Later, I met Adv. Haim Corfu, first as Minister of Transport and later the Airport Authority’s Chairman of the Board. He was a well-educated man with a long-term vision, who helped me a great deal when I was manager of the Ben Gurion airport, and later, CEO of the Authority. He taught me about the proper relationship between chairman of the board and CEO, which would enable the organization to grow, move forward and operate in full harmony.

And last but not least, Benny Gaon, the then CEO of Koor Industries, who believed in my abilities and appointed me to senior roles in Koor, and later in Gaon Holdings. Benny was an educator and a trailblazer, a man of vision and endeavor, a manager, and a leader. He is the source of my business capacities and endeavor, as well as my ability to see far and act outside the box.

It is imperative that I mention the leadership and character of the man I learned to know well, impressed by his hard work in tandem with his vision, his thirst for knowledge about any topic pertaining to the good of the State of Israel, his decision-making capacity, and his gift to lead significant moves. Undoubtedly, I mean the late Yitzhak Rabin, who was prime minister when I was appointed the CEO of Israel Airports Authority. I can say explicitly and with no hesitation that without him the Ben Gurion 2000 project would not have come into being. Rabin was personally involved in setting the milestones and resolving the bureaucratic problems that we faced. He supported the project and helped us in carrying it out. I loved the humane and modest person he was, and since the day he was assassinated, my heart is heavy.

I hope that this book will indeed meet its objectives:

it will tell something about me, my family, the State of Israel, management and excellence, and mainly arouse the interest of young readers and add to their knowledge.